In celebration of World Architecture Festival this week, we had an architectural model building competition in the office. Our team split into 3 groups, Team London, Team Blighty and Team ID and were set a challenge to design and build a model lolly stick building. We may be great at recruiting people in the architectural and design field, but it turns out we aren’t so good at doing any building ourselves!

We kicked off our competition on Wednesday with the design phase. A variety of plans were made from fully drawn plans to totally invisible ones. At the end of the day on Wednesday, Team ID looked prepared to take victory.

On the day of the build however, plans went out the window and sheer desperation to make parts fit together changed everything. Team ID’s Art Gallery turned into a bridge, Team Blighty’s windmill design was re-purposed into an eco village and Team London forgot the windows and doors.

We asked Mike Brown from local architecture firm, HNW Architects to comment and judge the winner.

Of Team ID he said “Stack bonded sticks would be unstable”
For Team Blighty’s eco village, he said “I like the camp fire…& the tea looks to be the correct strength”
And finally of Team London’s model, extra points were awarded for the reference to the B-52s but noted that freestanding ladders are prohibited by Health and Safety. 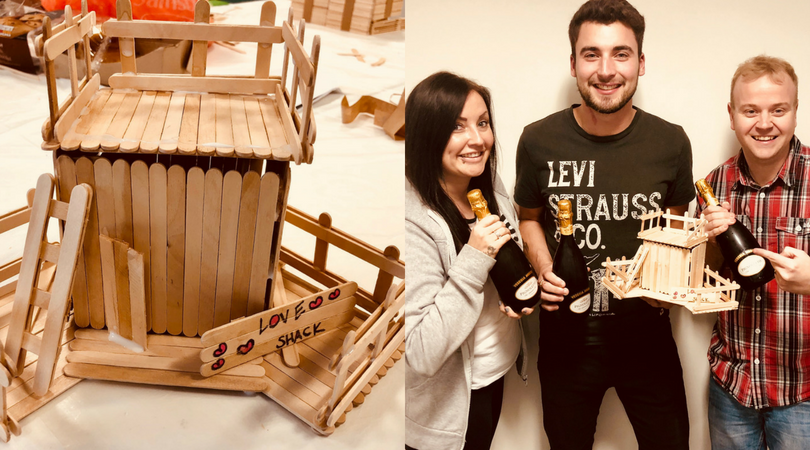 Whilst this project was a fun team building exercise, we have come away from it with a newly found respect for everyone in the architectural/design profession who draws plans and builds models. Take it from us, it certainly isn’t as easy as it looks. It no wonder that extensive study is required to be in the architectural field. We will get back to doing what we do best, recruiting the professionals!